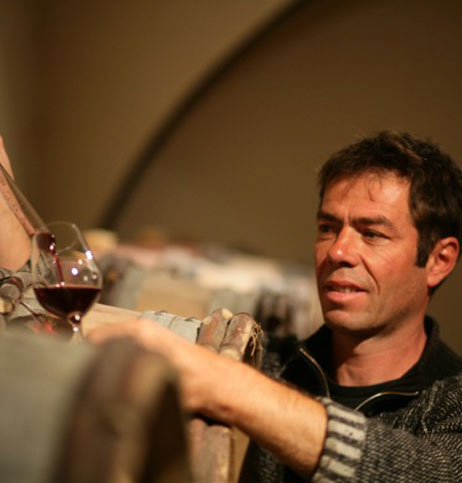 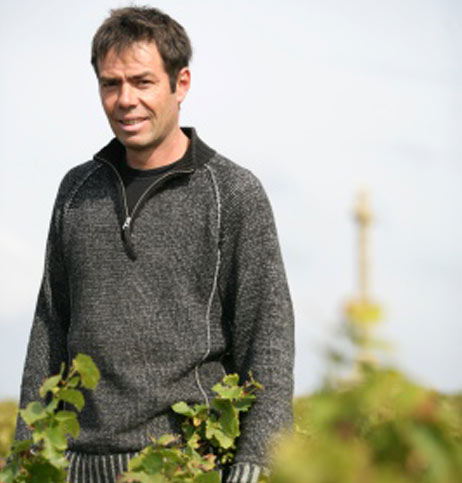 Jean-Marc Burgaud was recently dubbed ‘Monsieur Côte du Py’ by Bourgogne Aujourd’hui magazine. His fine domaine has seven hectares of vineyard on the Côte du Py in Morgon, 4.5 hectares of which are situated right at the summit, making the Burgaud family the biggest owner of vines on this famous hill. The vines were planted between 1940 and 1974 with a massal selection, and are all gobelet trained and planted at high density – “Gamay needs high density to reduce its natural vigour,” says Jean-Marc. He is obsessed with the quality of the fruit, so only uses grapes from his own estate. The fruit, coupled with what he calls ’la vraie vinification Beaujolaise’, account for the quality and style of these striking wines that has led many to call this the finest domaine in Beaujolais.

Jean-Marc is originally from Lantignié, where he has 4.5 hectares of Beaujolais Villages vineyards. His wife, Christine, is from Morgon, and the 11.5 hectares in Morgon were inherited from her side of the family. “My father used to tell me that Lantignié produced the best Beaujolais, but when I first met Christine, her father opened a 20-plus-year-old bottle of Côte du Py for me and that opened my eyes to the potential of Beaujolais,” he explains.

Today, the domaine has 18 hectares of vineyards across three appellations. His Beaujolais Villages is a masterclass in balance. According to Jean-Marc, a good Beaujolais must be made from ripe grapes so the tannins are mature, must be macerated long enough to extract these tannins but not so long that you begin to extract green tannins, so the fermenting wine has to be tasted every day to judge when the tannins are right and in balance with the acid. There are no set recipes here: it is a judgement based on an intimate knowledge of the grapes and the winemaking. “We don’t make wine with computers, we do wine by hand!” he states emphatically. The 2019 Beaujolais Villages has lovely colour, a fresh, clean and open nose with red fruits and a palate that is fleshy yet tight, with the grainy tannins holding the flesh in place and the perfumes lifted by a nice bite of acid on the finish. “Judge a domaine on its entry point wine,” says Jean-Marc. “I do as much work in the vineyard and cellar on this wine as I do on my Côte du Py.”

The 2019 Régnié is slightly more intense but equally friendly on the palate, with lovely length. This balance, which runs through all the wines, is achieved in the vineyard but conserved by the approach to winemaking. It undergoes what he calls a ‘semi macération carbonique’. All the wines are whole bunch fermented, except for a small percentage in ‘Les Grands Cras’ which is destemmed. The must is fermented at 23 to 28°C, with only one pump over per day. Maceration varies from about seven days for the Beaujolais Villages to 8 to 10 days for the Régnié and generally 12 to 15 for the different wines from Morgon and pre-fermentation maceration is avoided completely. The 2019 ‘Les Charmes’ eases the taster into Jean-Marc’s Morgons. From old vines grown on granite soil, it was macerated for only nine days in 2019. The wine has dark fruit characters but is still very fresh, with lovely richness and tannin on a palate that finishes long and intense.

Like his other wines, the Côte du Py is aged in concrete. “Gamay has a difficult relationship with oak,” he says. The Côte du Py is one of the few outcrops of decomposed blue rock in Beaujolais (Côte de Brouilly is another), giving wines of greater structure than many associate with this region. The 2019 vintage, Jean-Marc’s 31st, was bottled at the end of June. Its intensity, coupled with its freshness and balance, show why this hill is so famous, and why Burgaud is held in such high esteem.

Jean-Marc’s intelligence is amply illustrated by his Beaujolais Villages Blanc. The Gamay previously planted on this one hectare of clay soil didn’t produce the sort of wines he was looking for, but he thought it might be suited to Chardonnay. The wine is tank fermented and malolactic fermentation is blocked to retain freshness. Unoaked and bright and lively, it is just as delicious and individual as the red wines.