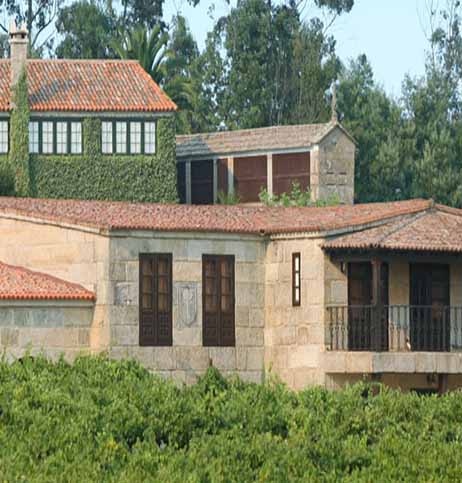 Lagar de Pintos is a small family estate located in the Salnés Valley, the most northerly subzone of the Rías Baixas appellation. It is run by two sisters, Marta and Carmen Castro-Pintos. Their traditional Galician ‘pazo’, or manor house, is a typical feature of the lush green countryside found here, just a few miles from the unspoilt beaches of the Atlantic coast. It has been in the Pintos family for four generations. Originally used as a farmstead where they kept sheep and cows, it wasn’t until the 1950s that their grandfather planted vines. Their father, Pepe Pintos, modernised the estate in the 1980s when the region started to embrace wine production following the revival of the Albariño grape variety.

Today, winemaker Marta manages the family’s 5.5 hectares of organically farmed Albariño, assisted by respected consultant viticulturalist Dominique Roujou de Boubée. The vineyards surrounding the house are divided into seven plots – Palomar, Gatiñeira, Requeixo, Cachadiña, La Escusa, Albar and Puente Arnela – each of which contains varying degrees of granite and sandy soils. Vines planted on soils with a higher proportion of granite tend to ripen earlier than those with more sand, which means that there can be up to 20 days difference in harvest dates between plots.

Lagar de Pintos Albariño is a finely balanced blend of fruit from these seven plots. They are each fermented separately using indigenous yeasts and aged on lees in stainless-steel tanks for seven to eight months. Marta avoids malolactic fermentation which helps to retain the fresh, lively fruit that characterises this wine. The nose is scented with zesty citrus notes and is matched by a concentrated and grapefruit-accented palate. There is a trace of salinity on the finish which makes this a very flavourful and complex Albariño.